Ancient Cultures That Used Cannabis To Get High

Did Ancient Cultures Use Cannabis to Get High?

Humans have been using cannabis since prehistory. While the earliest recorded cannabis product is a 29,000-year-old hemp rope found in the Czech Republic in 1977, we don’t know if these prehistoric peoples were using cannabis for any medical, spiritual, or recreational purposes. Many early human cultures viewed disease as a manifestation of spirits or demons, so early medical, spiritual, and recreational use overlaps in ways that it might not today.

The Yamnaya were a nomadic herding culture living in Eurasia in the late Copper Age to Early Bronze Age (3300-2600 B.C.E.) Their name comes from the burial pits they dug. Yama is “pit” in Russian, and yamnaya is an adjective meaning “related to pits.” The Yamnaya culture is credited with bringing the use of wheeled vehicles, metal working, and horseback riding to Europe. The Yamnaya traveled great distances on their horses and in their wheeled carts. According to recent research, they may have been ancient pot dealers. Cannabis pollen, fibers, and fruit have long been found at Yamnaya archaeological digs throughout Eurasia, suggesting to researchers that the Yamnaya people likely played a significant role in spreading cannabis use across Eurasia. Recent research indicates that the Yamnaya were genetic ancestors of the Scythians, who were an Iron Age nomadic group long associated with smoking weed. Herodotus, the classical Greek historian writing in the fifth century B.C.E., described how the Scythians would consume cannabis by building a fire inside of a tent, throwing handfuls of cannabis seeds onto the coals, and sticking their heads inside to inhale the vapor. Herodotus wrote: “The Scythians then take the seed of this hemp and, creeping under the mats, they throw it on the red-hot stones; and, being so thrown, it smolders and sends forth so much steam that no Greek vapor-bath could surpass it. The Scythians howl in their joy at the vapor-bath. This serves them instead of bathing, for they never wash their bodies with water.”

(Xinhua Wu)[/caption] The earliest evidence of people smoking cannabis comes from a 2,500-year-old grave at the Jirzankal Cemetery in the Xinjiang region of Western China, near the border of modern day China, Pakistan, and Tajikistan. Excavators found 10 wooden bowls and several stones containing burnt residue of cannabis. Scientists believe that people used hot stones to heat the cannabis and then inhaled the smoke as part of a burial ritual. So, were they getting high in these rituals? Scientists examined the burnt residue and detected “high levels of psychoactive compounds,” including THC, the primary psychoactive compound in cannabis.

Hundreds of mummies have been found in the arid Tarim Basin in the Xinjiang region of China. One of these mummies was a shaman who was buried with a hefty stash of cannabis. Unlike Egyptian mummies, the Tarim mummies were preserved by the dry desert conditions and salty sand in the area. This weed-smoking shaman was a high-status male who died when he was around 45 years old. He was found with an unusual array of high-value items, including horse-riding bridles, a harp, archery equipment, a make-up bag, and a large leather bag filled with nearly two pounds of cannabis. The stash of cannabis contained no large stalks or stems, nor did it have any male plant parts, suggesting that the stash was pooled from many plants and carefully sifted through to maximize its psychoactive effects. Researchers studied the ancient weed and found it to be remarkably similar to modern day cannabis samples, containing high levels of THC and relatively low levels of CBD. Fascinatingly, the scientists analyzed the characteristics of the seeds and determined that the cannabis came from a cultivated strain. Archaeological sites in Xinjiang, China have revealed some of the earliest examples of ancient peoples getting high. Beyond archaeological evidence, many ancient cultures’ medical treatises and spiritual texts mention cannabis in a way that suggest they knew of its psychoactive effects.

One of the earliest recorded references to cannabis is in the Vedas, which are ancient Hindu texts that may have been compiled as early as 2000-1400 B.C.E. The Vedas deem cannabis “a source of happiness, joy-giver, liberator that was compassionately given to humans to help us attain delight and lose fear.” 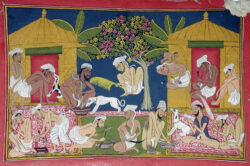 The god Shiva is frequently associated with cannabis. According to legend, Shiva wandered into the fields after an argument with his family. Drained from the argument and hot sun, Shiva fell asleep under a leafy plant, which he sampled when he woke up. Instantly rejuvenated, Shiva made cannabis “his favorite food” and became known as the Lord of Bhang. In general, cannabis is “strongly associated with Shiva, the meditating hermit.” Bhang is made by grinding cannabis leaves into a paste, where it is mixed with milk, filtered, and flavored with kusha grass, sugar, fruit, and spices. During Holi, an ancient Hindu festival, people traditionally consume bhang and engage in a free-for-all festival of colors.

Did the Ancient Egyptians Use Cannabis?

According to many Egyptologists, the ancient Egyptians frequently used cannabis in their medical practices. The word “shemshemet” pops up in many ancient Egyptian medical texts, and scholars believe this hieroglyph refers to cannabis. Ancient Egyptian physicians may have prescribed cannabis to deal with pain, fever, or even glaucoma. Notably, the Pyramid Texts carved into stone in 2350 B.C.E. have the hieroglyphic symbol “shemshemet” and refers to it as “a plant from which ropes are made.” It is hard to imagine a plant other than cannabis that is widely used in a medical context and is a primary fiber-producing plant. It is likely that the ancient Egyptians used cannabis for medical purposes, but did they also use it to get high? 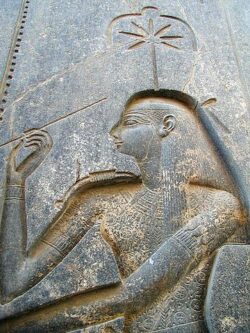 The Egyptian goddess Sheshet, the deity of writing and record keeping, was often depicted with a seven-pointed leaf above her head, which many scholars believe to be a cannabis leaf. Perhaps the Egyptians had discovered that cannabis can enhance creativity and focus. Additionally, scientists have discovered cannabis pollen on the remains of the Pharaoh Ramses the Great, suggesting cannabis pollen may have been used in his funeral rites. There is even some evidence that ancient Egyptians smoked weed. Researchers have discovered high concentrations of THC in the lungs of another mummy, suggesting this ancient individual inhaled a significant amount of cannabis smoke before his death.

Did They Use Cannabis in Ancient China?

Accounts of medical cannabis use appear very early in the Chinese written record. As discussed in A Brief History of Cannabis Wellness, the legendary emperor Shen Nung (ca. 2000 B.C.E.) is attributed with writing a famous medical treatise that describes the medical use of cannabis. However, the ancient jade stone “oath documents” contain the “the earliest reference to the psychoactive and psychological effects of Cannabis.” Found in Shanxi Province and dating to between 770-480 B.C.E., the “jade stone 'oath documents' contain the archaic character ma for hemp, along with the connotation of negative that denotes the stupefying nature of Cannabis hemp.” According to scholars, this evidence suggests these ancient peoples were well aware of cannabis’ psychoactive effects. Cannabis was such an important crop in ancient China that the phrase “the land of mulberry and hemp” was synonymous with “cultivated fields and the land of China.” Mulberry leaves fed the silkworms, while hemp was an important source of medicine, food, and fiber.

Like the ancient Egyptians, some of the earliest Sumerian medical texts appear to mention cannabis. According to Robert Campbell Thompson in his 1936 A Dictionary of Assyrian Chemistry and Geology, the Sumerians and Assyrians had various words that are thought to refer to hemp. Particularly, there is a word “A-Zal-Lu” that refers to the idea of “spinning” a plant to make cloth or rope. Evidently, this evokes the ancient Egyptian plant that could be spun into fiber and used as medicine. Remarkably, a clay tablet that listed synonyms for “A-Zal-Lu” was translated to “indicate [A-Zal-Lu] was ‘for or against panic,’ suggesting the duality of cannabinoid activity and its biphasic effects on many symptoms.” As many cannabis users have noted, a small dose of cannabis can alleviate anxiety, but a high dose can induce anxiety or panic. It seems that these ancient cannabis users had already discovered the biphasic effects of weed. The ancient Near Eastern cultures also had another word “qunupu” or “qunubu” that appears to be the origin of our word “cannabis.” If you want to learn more about that, check out our article What is the Origin of the Word “Cannabis”? Explore our Wellness Center to answer all your cannabis-related questions.

Jointly is a new cannabis wellness app that can help you track and optimize the 15 factors that can impact your cannabis experience. These 15 factors include your dose, the time of day that you consume cannabis, your wellness goals, how much sleep you got the night before, and more. Curious about tracking and optimizing how you use cannabis and CBD? Download the Jointly app on the App Store or the Google Play Store to get started on your cannabis wellness journey.