Due to advances in technology, science and public health, humans now live about twice as long on average as we did in the pre-modern world. With that increased lifespan comes new challenges, like how to maintain wellbeing as we age. One of the most feared aspects of growing old is age-related cognitive decline. But according to researchers at the School of Public Health at the University of Haifa, cannabis may have the potential to improve brain health in older folks. If cannabis is a viable treatment against cognitive decline, perhaps there will be more seniors getting their medical marijuana card or dropping by their local cannabis dispensary In February of 2020, researchers at University of Haifa published a literature review of human and animal studies that explored cannabis use in older adults, cognitive function, and brain aging.

Due to decades of prohibition on cannabis, there aren’t many scientifically rigorous studies on cannabis and cognition, and there are no studies that exclusively focused on cannabis and cognition in older adult humans. But there is preliminary evidence that cannabis has a radically different effect on an aging brain than it does on a young, developing brain. In a young, developing brain, animal studies indicate that cannabis use may permanently impair cognition. However, this effect was not observed when researchers administered THC to rats in late adolescence or adulthood, suggesting “the effect of exogenous cannabinoids consumption on the brain may differ by age.” As medical marijuana clinics and recreational marijuana programs sprout up across the country, older adults are increasingly likely to use to cannabis as a natural remedy for sleep 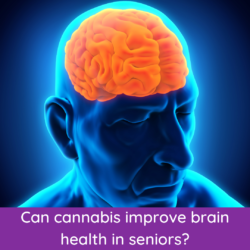 issues, pain, and stress. Shifting attitudes and policies, combined with “accumulating evidence of the therapeutic effects of cannabis,” gave the researchers the push to critically examine what is known and unknown about the effects of cannabis use on the aging brain.

What Did They Find?

The literature review uncovered several noteworthy studies on animals and humans. A 2017 study “examined the effect of low-dose THC on young, mature and old mice respectively.” The study found that THC worsened cognitive performance in young mice, but that treating old mice with low-dose THC “restored learning and memory abilities in old mice to the level observed among young, untreated mice. The effects in cognition were accompanied by an increased synaptic connectivity and hippocampal spine density, which again, reached the levels of young animals.” These findings are supported by further studies on mice. A 2018 study found that treating old mice with an extremely low dose of THC (0.002mg/kg) led to improved memory and learning as well as positive changes to brain volume, tissue density and neurogenesis. The researchers noted that they found very few studies exploring the effect of cannabis on cognition in humans, and the ones they did find had “low power due to small sample sizes.” One of these was a 2016 study that looked at cognitive performance in 11 patients who got their medical marijuana card for a variety of reasons. Cognitive performance was measured before the start of their treatment and after three months of cannabis consumption. The authors found “some improvement in executive function, which according to the authors, could have been attributed to improvements in various symptoms,” like depression or sleep quality. However, a follow-up study including fMRI assessments and found “more normalized patterns of brain activation after 3 months of medical cannabis treatment.” Taken together, these findings suggest that cannabis may offer some hope in combating age-related cognitive decline. Cannabis doctors should take note, but more research is needed before cannabis can be effectively employed to manage age-related cognitive decline.

The researchers note that cannabis consumption in old age may be associated with improved brain health and cognitive function, but that the mechanisms of action could be direct or indirect. We know that cannabis can help seniors sleep and can also relieve pain, so perhaps the cognitive and neurological benefits could be due to improvements in sleep or relief from chronic pain. But the benefits could also be caused by “direct neuroprotective effect of the whole cannabis plant or of its specific components.” For example, THC has potential therapeutic qualities that may slow or halt mild memory loss due to aging. In addition to THC, cannabis has more than 500 other distinct chemical compounds that may exert “a synergistic effect on the brain.” To further complicate the issue, human endocannabinoid signaling undergoes “marked changes in the aging brain,” which means that exogenous cannabinoids will interact with the brain differently depending on age. While some of these findings are exciting, more research is needed before any firm conclusions can be made about how cannabis impacts the aging brain. The researchers noted that there was some concern that cannabis use in older people could actually lead to cognitive decline, but argued that “the concern that cannabis use in old ages will adversely affect brain function does not necessarily contradict the possible neuroprotective properties of cannabis.”

Can Cannabis Help You Improve Your Well-Being?

So, is cannabis the right choice for your health and wellness goals? Use Jointly, a brand-new cannabis wellness app, to learn if cannabis can help you improve your health and wellbeing. Jointly is a free cannabis club for health-conscious cannabis users to track and record their CBD and cannabis consumption, including the dose, time of use, composition of the cannabis product and the reasons you are using cannabis in that session, plus various other factors that can influence your experience. Over time, Jointly builds a personalized recommendation engine for you that will suggest new products and better routines to help you eliminate side effects and get the results you want every time. Head over to Achieving Your Wellness Goals with Cannabis and CBD to learn more about how to set use Jointly to set health and wellness goals, track your cannabis consumption and take control of your wellness journey. Download the Jointly app today and start accomplishing your wellness goals with cannabis and CBD!