Cannabis provides some people with such acute relief from anxiety that in some areas of the United States you can visit your local medical marijuana clinic, describe your symptoms to a cannabis doctor and get prescribed medical cannabis as a treatment for anxiety. But anxiety and panic are also the most common negative side effects of marijuana intoxication. Dose appears to be the most important factor in determining whether you will have a good or bad time when consuming cannabis. THC “appears to decrease anxiety at lower doses and increase anxiety at higher doses.” 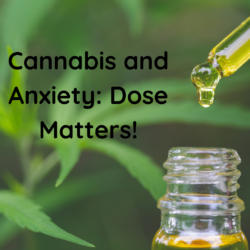 But the way you consume cannabis also seems to impact whether or not you are likely to feel anxiety. Edibles seem to cause anxiety more consistently than other routes of administration like smoking or vaping. Widespread policy changes have led to millions of people trying cannabis for the first time in an edible or through a vaporizer, which are “novel methods of administration.” Few studies have looked at whether vaped versus orally consumed cannabis produces different subjective effects, and “those that have been conducted were underpowered to detect sex-differences in outcomes,” and focused primarily on regular cannabis users rather than infrequent users. In September of 2020, researchers from Johns Hopkins University published a new study indicating that biological sex may be an important factor in whether cannabis relieves or causes anxiety. The researchers reviewed four double blind, placebo controlled laboratory studies on humans, and found that females are more likely than males to experience anxiety-related symptoms from cannabis.

The endocannabinoid system (ECS) is “expressed in all brain regions that are important for the processing of anxiety, fear and stress.” Research has revealed that endocannabinoids appear to “modulate highly interactive stress and reward networks,” which establish the balance between distress and wellbeing. In short, the ECS plays an important role in anxiety. And according to a 2016 review published in Frontiers of Neuroendocrinology, “it has become increasingly clear that sex-differences are the cornerstone of cannabinoid-regulated biology.”[4] There is ample evidence that cannabinoids exert sex-dependent effects on various physiological and behavioral aspects, particularly food intake (more evident in males) and anxiety (more evident in females). Studies in both humans and rodents indicate there are sex-based differences in THC metabolism. As a result, the researchers wanted to determine if there are sex-based differences in anxiety related to cannabis intoxication.

How Did They Conduct The Study?

In the four laboratory studies, male and female participants consumed cannabis or a placebo, and they ingested the drug either through inhalation in a vaporizer or orally as a brownie. The participants ingested doses ranging from 5mg to 25mg of THC. Before ingesting cannabis, baseline measurements were taken for heart rate, subjective effects, blood cannabinoid concentrations and cognitive/psychomotor performance.

What Did They Find?

All participants who consumed THC experienced dose-dependent increases in heart rate, subjective drug effects, and “impairments in cognitive performance,” all of which was expected. Dose-related increases in the “pleasant drug effect” were higher in the vaporized group than in the edible group, regardless of sex. And peak blood THC concentrations were higher in the vaporized group than in the edible group. After controlling for weight and blood cannabinoid concentrations, ratings for “anxious/nervous”, “heart racing” and “restless” were much higher in female participants compared to male participants. The researchers note, “Although subjective heart rate was much higher for female versus male participants, there were no sex differences in objective physiological markers.” That means that the female participants were more likely to feel that their heart was racing, although their hearts were not beating at a higher rate. The authors of the study suggest, “public health messaging and clinical decision making around the use of cannabinoids should recommend lower starting doses for females.”

Limitations of the Study

While this study suggests there may be sex-based differences in whether cannabis produces anxiety, there are several important limitations. 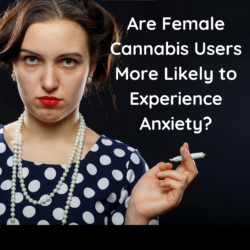 The study did not collect data regarding the female participants’ menstrual cycles or whether they used hormone-based contraceptives, although previous studies have indicated that hormonal fluctuations may influence the effects of psychoactive substances. Only one type of vaporizer and edible were included in the study, and the authors note that other administration methods “could alter THC delivery.” And only one type of cannabis was used: a THC-dominant (10%-13% THC) strain with very low levels of CBD and CBN. The authors state that it is unknown if sex-related differences in subjective effects would “translate to different chemovars, such as those containing different ratios of THC to CBD.”

While the researchers primarily focused on THC in this study, other studies have shown that CBD “appears to decrease anxiety at all doses that have been tested.” If you want to avoid side effects like anxiety, it might be best to try cannabis products with CBD in them. As the researchers from Johns Hopkins note, legalization has “given rise to a booming retail cannabis marketplace, with incredible diversity in cannabis products with respect to chemical composition, intended route of administration and formulation.” With so many products to choose from at your local cannabis dispensary, you need a tool to help you find out what products work for you and other cannabis users like you. Jointly is a free smartphone app that allows you to look up legal, licensed cannabis and CBD products in your state based on your wellness goals, and see how other users like you rated a product on a scale from 1-10, based on how well it helped them achieve their wellness goals. Additionally, Jointly allows you to track and record your CBD and cannabis consumption, including the dose, time of use, composition of the cannabis product and various other factors that can influence your experience. As you track your cannabis consumption on Jointly, you will learn about the factors that can impact your cannabis experience and how to eliminate side effects like anxiety. For example, as we discussed in Jointly’s Product Type Report Volume 1, our early data suggests that people find better success with the wellness goal of relieving anxiety when they consume tinctures or topicals rather than edibles. Download the Jointly app today and start accomplishing your wellness goals with cannabis and CBD!