Is Marijuana A Hallucinogen?

Is Weed a Hallucinogen? How Should We Classify Cannabis?

What is a Hallucinogen?

Hallucinogens are substances that cause hallucinations. Hallucinogens alter perception and cognition, induce spiritual and mystical experiences, and occasionally cause anxiety and psychological distress. A hallucinogen has effects on:

Some common substances that interact with 5HT2A, NMDA, and κ-opioid receptors and cause hallucinations are:

So, is marijuana a hallucinogen?

Is Weed a Hallucinogen?

Can Weed Make You Hallucinate?

Weed can make some people hallucinate. The small subset of people who experience hallucinations when they consume cannabis are statistically more likely to have a genetic risk for psychosis. Additionally, certain gene variants may predispose one to cannabis-induced hallucinations. For example, a 2021 case report of a 57-year-old man with Parkinson’s disease (PD) found that cannabis caused vivid hallucinations. Pharmacogenomic tests found that this man had variants for the COMT gene and the HTR2A gene that may explain his cannabis-induced hallucinations. The COMT gene encodes genetic instructions for an enzyme that breaks down catecholamines like dopamine. The HTR2A gene encodes instructions for the 5HT2A receptors. The researchers indicate that this man’s genetic variants, combined with medication to treat PD, combined with cannabis, led to dopamine-mediated hallucinations. However, most people will not experience hallucinations when they consume weed. 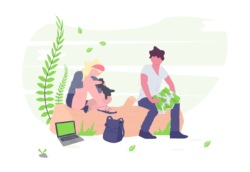 Why is Marijuana Considered a Hallucinogen?

It is thought that marijuana is not a hallucinogen for people that do not have a genetic risk for psychosis. So, why is marijuana considered a hallucinogen? Quite simply, because sometimes cannabis does cause hallucinations. However, cannabis is not the same as other hallucinogens. A 2018 case report shines light on why cannabis could be considered a hallucinogen. A 30-year-old healthy male who participated in a double blind, placebo-controlled laboratory study experienced acute hallucinations when inhaling vaporized cannabis flower containing 25mg of THC. The researchers state, “the hallucinatory experience in this case was qualitatively different than that typically experienced by participants receiving classic and atypical hallucinogens, suggesting that the hallucinatory effects of cannabis may have a unique pharmacological mechanism of action.” The researchers note that other lab-based studies have found hallucinatory effects when administering pure THC or synthetic cannabinoids that are full CB1 receptor agonists. They suggest that exogenous CB1 receptor agonists may be able to induce hallucinations, but that this effect is difficult with cannabis, because THC is only a partial agonist of the CB1 receptor. Additionally, other cannabinoids or terpenes in cannabis may mitigate this hallucinatory effect under normal circumstances.

Is Marijuana a Hallucinogen?

So, is marijuana a hallucinogen? While most people won’t experience hallucinations, in some situations, THC and synthetic cannabinoids have induced hallucinations. So, how should cannabis be classified? As we discussed in Is Weed A Stimulant? and Is Marijuana A Depressant?, cannabis is a complex drug that acts as a stimulant, depressant, and hallucinogen.

Get Started on Your Cannabis Wellness Journey

Have you started your cannabis wellness journey? Jointly is a new cannabis wellness app that helps you discover purposeful cannabis consumption so you can achieve your wellness goals with cannabis and CBD. On the Jointly app, you can find new cannabis products, rate products based on how well they helped you achieve your goals, and track and optimize 15 factors that can impact your cannabis experience. These 15 factors include your dose, the environment in which you consume cannabis, who you are with when you ingest, how hydrated you are, the quality of your diet, how much sleep you got last night, and more. Download the Jointly app on the App Store or the Google Play Store to get started on your cannabis wellness journey.