US sprinter Sha’Carri Richardson is a victim of the protracted and unjust “war on drugs.” Despite the broad acknowledgment of the inequities and terrible consequences of this ongoing war and broad acceptance and legalization of medicinal and even adult-use cannabis, there will be more victims. That’s because injustice thrives in the grey area. The lack of clarity around legal, regulatory, and cultural approaches to cannabis has created confusion or “greyness” around what is legal, right, and appropriate. In the case of Sha’Carri Richardson, her marijuana use was legal, complied with state regulations, and is socially and culturally appropriate. However, as with many corporations operating in legal states, the Olympic Committee has its own rules and testing guidelines. Besides creating confusion and sending mixed messages, this sets a dangerous precedent when it comes to inequity.

Testing and regulations and policing are all important, and yet there needs to be more clarity around who can order tests, who they test, and what happens to the results. Just as there needs to be a more efficient and yet expansive approach to understanding which products work, work well, or don’t work at all. Another area of testing needs to be addressed as well: products currently produced, distributed, and sold outside of the regulated cannabis ecosystem. These “grey” markets often exist in decriminalized and adult-use states. In some cases, they operate outside of the law and skirt tax, regulatory and quality-control measures. This is a bad thing for a number of reasons: it penalizes the legitimate cannabis industry, perpetuates criminal behavior and the dangers associated with it, and creates a hazard to consumers. The latter point is primarily due to the fact that grey markets have no mechanism for evaluating, testing or rating products. That means you never know what you’re going to get, even if you buy the same product twice. Millions of people use marijuana helping them manage pain, reduce stress, mitigate anxiety, and recover after intense physical exertion. Many of these consumers of cannabis are exposed to possible testing from the companies they work for or, in the case of Richardson, an organization such as the US Olympic Committee. Testing is remarkably widespread and tends to disproportionately affect lower-income workers and thereby people of color. [caption id="attachment_2701" align="alignright" width="342"] 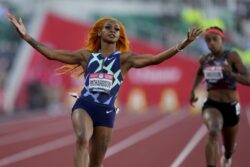 (AP Photo/Ashley Landis) (Ashley Landis/AP)[/caption] Just last month, it was reported that companies continue to test for marginal levels of marijuana use. About 2.7% of the approximately seven million drug tests conducted by Quest Diagnostics on behalf of employers came back positive for marijuana—up from 2.5% in 2019 and 2% in 2016. While these employees are not high-profile as Richardson, the stakes are equally high. Faced with potential job loss, penalties, or lack of promotion, the impact is surely significant. Testing also causes unnecessary stress with employees uncertain if State laws will protect their jobs. USA TODAY interviewed several mothers in Florida who said they were docked for using marijuana. Parents have lost custody battles for testing positive for THC and there are still over 40,000 mostly black and brown people in prisons for marijuana use. THC is still considered a Schedule 1 drug by the DEA, even though 36 U.S. states have legalized marijuana for personal, recreational use or for medical use. Those same millions who consume cannabis have a need and a right to understand more about the products they use. Testing in regulated markets creates a safety net of sorts, but does not address the fundamental issue most on the minds of consumers: does this product work for me? We’ve tracked and recorded consumer experience with over XX legal cannabis products. This database is not just valuable, it plays a critical role in keeping the industry safe and equitable. This is a call for entrepreneurs in the legal cannabis industry to join us in refocusing our current testing from people to products, to help close the door on grey markets, avoid terrible consequences such as those Richardson is facing, and once and for all put an end to the war on drugs.